14 Mar Is the Phillips Curve Dead? Examining the Relationship Between Inflation and Unemployment

March 2019 marks the ten-year anniversary of the stock market bottom in 2009 as a result of the global financial crisis (GFC). For some, the recession is a distant memory- there are students in college today who don’t remember what it was like to live through that period in time. Those who do remember will never forget.

The most prominent memory for most is likely the high levels of unemployment we experienced. The unemployment rate hit a peak of 10% in October 2009 (bls.gov) and has been decreasing steadily since then.

While the economy has made great strides in unemployment rates since 2009, reaching a low of 3.7% in September and November 2018, we have not yet reached historically low levels. The record lows under our current measurement methods belong to 1953 (2.5%) and 1968 (3.4%). While the government did not have the infrastructure in place to measure employment data with modern methods at the time, estimates peg the unemployment rate during World War II as having reached a shockingly low 1.2 percent! 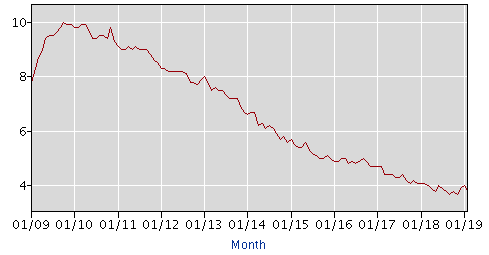 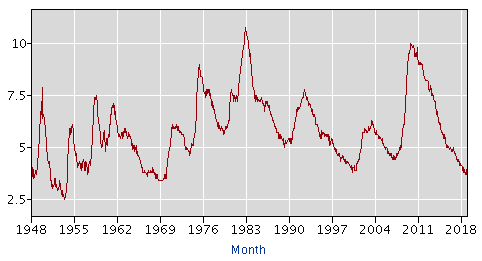 The bureau of labor statistics only considers a person “unemployed” when they do not have a job and have been actively looking for work within the past four weeks. This is known as the “official” unemployment rate or the U-3 unemployment rate. Someone who does not have a job and is not looking for a job would be considered to not be in the labor force. The broadest form of unemployment is the “U-6” unemployment rate which includes workers who are: 1) not currently employed, 2) have not looked for work within the past four weeks, and 3) have looked for work within the past 12 months. Workers falling into the U-6 category are described as being marginally attached to the workforce and are often thought of as people who would like a job but have become discouraged with the job market and have given up looking for work for the time being. The U-6 rate also includes workers who would ideally work full time, but who are working part time for economic reasons.

One of the fears of economists and investors alike since the end of the GFC revolves around the relationship between unemployment and inflation- the so called “Phillips Curve.” Named after the research of New Zealand economist William Phillips, in broad strokes, the Phillips Curve shows that as unemployment decreases, inflation increases. The way economists picture the curve looks something like the image to the right.

The curve serves as a theoretical framework for economists- it is not a hard and fast rule with set values. The slope and shape of the curve has been shown to vary by time period and geographic location. Outliers exist, but historical data has shown this relationship to hold true. 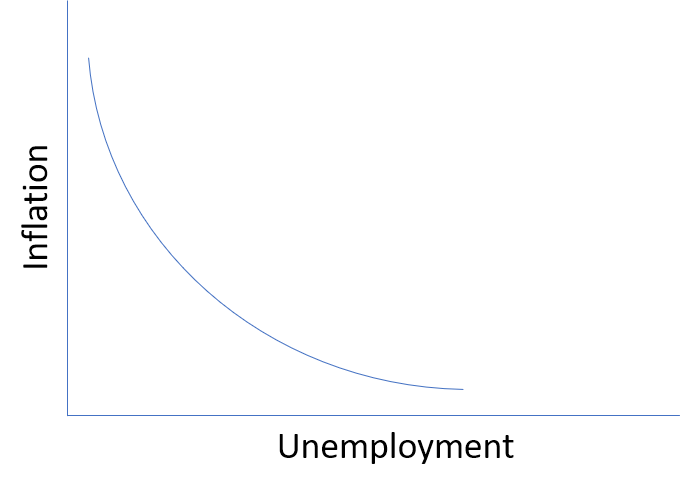 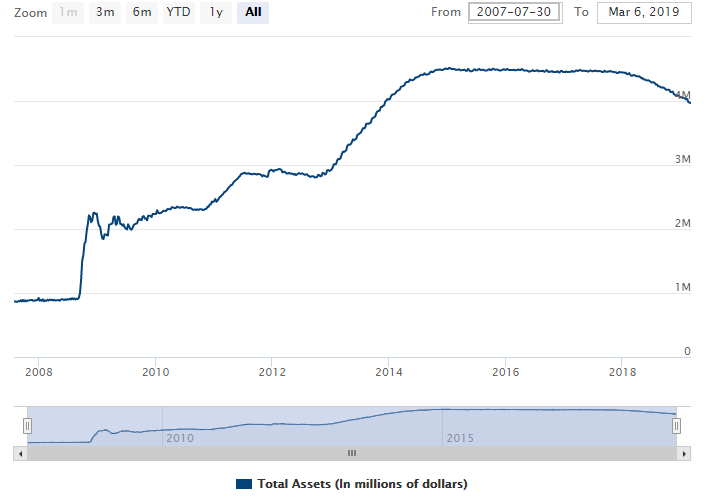 In the past, all economic recoveries have involved an improving unemployment situation which then applies upward pressure on inflation- the Phillips Curve. The current recovery is unique because it has featured additional theoretical upward pressure on inflation in the form of “quantitative easing” by the Fed. Also known as open market operations, quantitative easing involves our central bank buying assets (primarily bonds) on the open market. The Fed “prints money” in order to do this. While open market operations are nothing new, the scale and length of the bond buying program the fed undertook in the wake of the GFC is unprecedented. Total assets on the Fed’s balance sheet ballooned from about $870 billion to roughly $4.5 trillion from 2007 to 2015. This had the effect of injecting over $3.6 Trillion of cash into the economy. A cash infusion of that size should theoretically lead to significant levels of inflation in the long run.

The recovery from the GFC, therefore, featured not one, but two potential triggers for inflation. So, the question everyone is asking is: With unemployment having fallen so much, why have we seen little evidence of an increase in inflation? This question is very important because a sudden uptick in inflation would have wide ranging implications for both the stock market and the economy as a whole. Remember, the Federal Reserve operates under a dual mandate: it is required by congress to pursue the goals of 1) maximum employment and 2) stable prices- simultaneously. This is an explicitly difficult task because the Phillips curve shows these goals to be at odds with one another. Furthermore, history has shown that when the Fed attempts to curb high inflation, it often comes at the expense of high unemployment rates and a decrease in stock prices.

So why have we not seen much evidence of significant inflation? There are likely several factors at play here, and theories abound but the most plausible are: changes in labor force participation and deflationary pressures due to market changes. 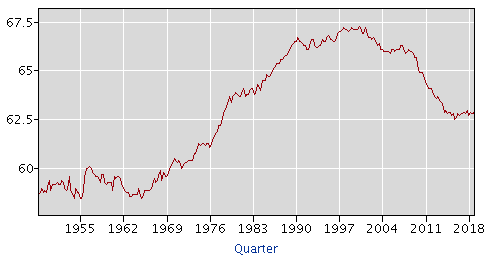 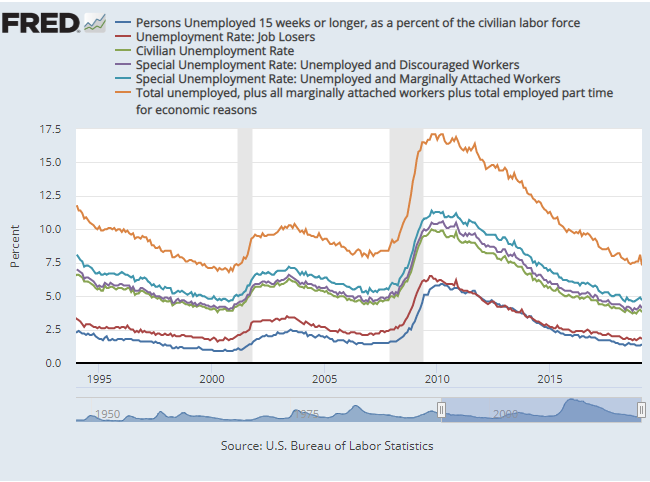 One of the strongest theories about our missing inflation is that the U-6 rate was extremely high because so many people gave up looking for work during and after the recession meaning that using the official “U-3” unemployment rate was probably the wrong measure of unemployment. This “extra” unemployment (the difference between the official U-6 rate and the U-3 rate) served as a sponge- soaking up any inflation that would have existed had the recession and the employment situation not been so dire. The U-6 rate, coupled with falling labor force participation, paints a picture of an American job market with a lower percentage of people working than they historically have- putting us further to the right end of the Phillips curve than we thought.

The graph on the left from the St. Louis Fed shows the difference between unemployment rates under different definitions of unemployment:

The American economy looks markedly different today than it did at the start of the GFC. The first-generation iPhone hadn’t even been released at the beginning of the crisis. Amazon, currently trading for $1678 per share was trading at roughly $40 per share. Netflix, a $357 stock, was trading for about $3 per share. The internet was not nearly as big a part of our lives in 2007 as it is today. For consumers, the internet has improved the process of determining whether a product is competitively priced. Who among us hasn’t been in a store and compared the price of an item to the same item on Amazon?

The Bureau of Labor Statistics measures inflation by comparing the cost of a “basket of items” commonly purchased by individuals over a period of time. Increases in the cost of this basket over time is referred to as inflation. The internet has drastically improved our ability to not only compare prices, but to procure items from other sources. This has forced retailers to become much more competitive on price over time- applying downward pressure to inflation.

Another area that has seen major technological disruption since 2007 has been the energy sector. Technological advancements in drilling and fracking have substantially reduced the costs of production for oil companies resulting in much cheaper oil and natural gas. Oil is an input for almost every product we use in one way or another- not to mention the main cost associated with transportation. Dramatically lower energy costs have undoubtedly helped place a lid on inflation.

In addition to downward pressure on prices, large scale technological advancements have changed the skills necessary to find employment. This has surely affected the labor force participation rate as well. Some workers found their skillset unneeded by employers or found themselves living in an area without job growth and were unwilling or unable to move or get retrained and simply left the workforce.

In the face of an historic cash infusion by the fed and over nine years of job gains, we still haven’t seen inflation rear its ugly head. While some have posited that the Phillips Curve is dead, the more likely explanation is that the historical link between unemployment and inflation is experiencing a bit of a delayed reaction this time around. The great recession was historic in nature and also took place at a time of large-scale technological disruption. Although modest, we have seen increases in labor force participation over the last few years. I still believe that at some point the inflation sponge that is the U-6 unemployment rate will become saturated and inflation will return, but I doubt anyone will accurately predict when this will happen.